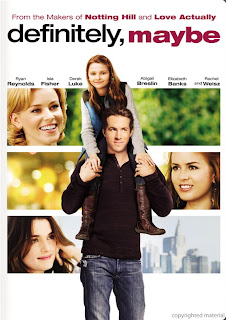 "I think you should tell me the story of how you met my mom."

It's quite an opening line for a trailer, and it's the sort of sentence that would make anyone stop in their tracks to listen (or watch) of how this love story unfolds.

I credit my friend Wes who first got me thinking about how truths about God can be seen in something as simple as a romantic-comedy (NOT a chick flick, but that's another post entirely).

Definitely, Maybe is a cute film about a man named Will Hayes who tells his daughter about his life after college and the three significant women in his life, all leading up to trying to guess which one is the mother (names in the story have been switched, thus making it a "love story mystery"). What makes this film a winner is its ability to look back on this man's life on the marks and memories that shaped his present self.

We reach a point in the film when Will has shares the good and the bad of his past relationships, and his daughter says something profound: "Dad, I can't believe you smoked... and drank... and was such a slut... But I still love you." And this, dear reader, is how God looks at us.

When Wes first pointed that out years ago I thought, "yeah that makes sense...", but as I think about it now it's even clearer. Because God can believe we are smokers, drinkers, and sluts, and he chooses to love us anyway. For Christians we strive for sanctification, but almost everyday we fail. And God chooses to still love us. It was God who loved us first, and which is why Hollywood borrows this translation of love for its own showcase.

Since then I've been looking out for "gospel bites" in films, because you can't not notice them when you are aware that they do exist. And they exist because they are what Hollywood needs to make a story.*

*I told someone recently that I just couldn't see anything in the Expendables 2** storyline. His reply: 'total depravity' to which I laughed, smiled, and nodded in agreement.

**Still a really great popcorn flick. If you like 80's action stars with explosions and Chuck Norris you'll love this.
Posted by Peter at 8:46 AM

Peter
A dude on a digital sojourn, piecing together interesting snippets of a grand narrative along the way.